Warning: the following is a boat geek Post and should be avoided like the plague by all of you who prefer cats, dolphins, camels, beautiful sunsets and all that other boring stuff. There will be none of that in this update. This is all about boat drivel and you should move on and wait for the NEXT post that will include the exciting plans for this summer.
OK boat geeks, now that we are alone…

As most of you know Heldeleine was hauled out and stowed ashore last August in Gaeta, Italy. During the past months various repairs and upgrades have been done with more to come. Though we sailed close to 5,000 miles last summer, crossing the Atlantic and half of the Mediterranean, there were very few failures and thankfully no emergency situations. I credit this to the careful preparation of the boat prior to the crossing and to the terrific crews that I had for every one of those miles. Once again I can’t thank you all enough for making this voyage with me and taking such good care of Heldeleine along the way!
As for the items that did need attention:
-a leaky seal to the front hatch which in heavy seas (we had a few) leaked onto the control box for the bow thruster causing some exciting moments in the middle of the night wondering WTF was happening in the bow of the boat. This was an easy fix after waiting a month for the part from Lewmar. 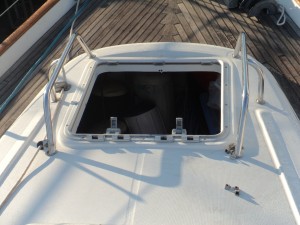 -a broken top swivel on the Genoa.(that’s the thingy that helps roll the front sail up, for the cat and camel lovers that are stupidly still here) 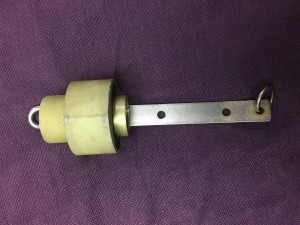 As we tried to lower the sail in August it would not come down and required an agile Italian rigger to go aloft and muscle the damn thing down. Due to the fact that sending anything to and fro from Italy is impossibly expensive (tariffs sending and tariffs arriving) they suggested that I buy a new part….there were 1,200 reason for me not to do that. Instead the part was sent to my sister Laurie (intrepid crew of the Azores-Gibraltar Leg) in Milan and she will bring it to Denver in May and send it to me. I will then send it to my repair guy in Florida. He will do the repair and send it back to me and I will return with it to Italy in July. Damn, what a screwy way to do the repair but….
-The Genoa. The cause of the top swivel damage was due to the New Genoa being cut too long. It looked good at the start but with a little natural stretch and my tightening the halyard slack…well… The sail loft in Gaeta has shortened the sail by 7″, repaired a damaged tack loop and cleaned the sail 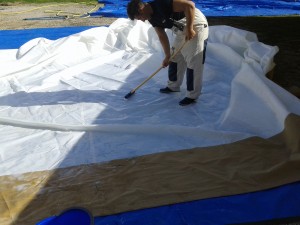 -starboard electric Winch. This is a big, honking Lewmar ST66. Now this will probably sound like a first-world problem but the high gear was not working (very slow and no real power under high load). Again the control box could not be sent to England for repairs because of the above reasons and there were again 1,500 reasons why I could not do that. Also the electrician on site, Emilio, pointed out that the breaker (emergency shut off) switch was down below and in the case of a malfunctioning switch having the breaker at the winch was a smart safety idea. I agreed and a new, safer improvement was installed. 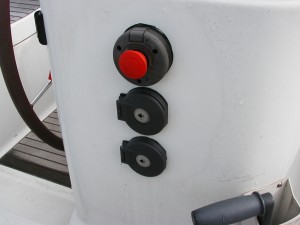 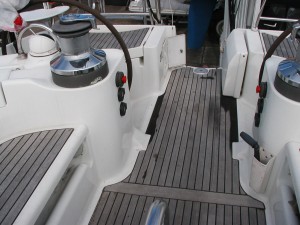 -the next item under discussion is the secondary alternator on the engine. My daughter Helen and I were on watch around 2am when I heard a sound from the engine (yes, we are on a SAILboat but…). Well, sharing a beautiful night on watch snuggled in a blanket with your daughter is priceless so I hesitated to leap below. Then a Bang, Bang, BANG got me moving. I shut down the engine and investigated. Yup, alternator belt had been loose, then REAL loose, then ripped the mount off the engine damaging the sheave as it launched the alternator around the engine. What a dumbass. From a priceless moment to a costly moment in seconds. As it was the secondary alternator, we were still able to charge the batteries but at a reduced rate. Well Emilio has some ideas and we will discuss how to tackle the repair over the next month. 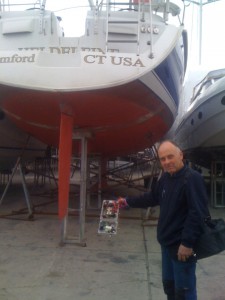 Doing all of this from thousands of miles away sucks. My liaison there, Jayne Koehler, has been absolutely terrific but being a hands-on type of owner who enjoys getting his hands dirty, this situation is frustrating in the extreme. But stuff IS getting done and plans are being hatched and in the next post I will give an overview of this summer’s cruise. Here’s a hint: it will not involve 5,000 miles or an ocean. Sun and fun yes.