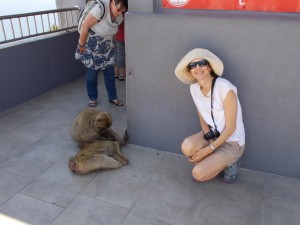 Hi! I’m a little late in writing this post but it’s been a crazy few days! No time to write, think, or flop onto a feather bed and kiss the world goodbye. Anyways, we had a incredible day in Gibraltar June 24, so that’s what I’ll be talking about in this post. So since my sis’ already gave a summary of our day, and I don’t want to get boring and repeat myself, I’ll just talk about some highlights.
The first one is the MONKEYS. After dragging our shaky legs off a tram car that was probably meant to carry no more than a few fleas, we didn’t expect to be wowed by the wildlife. However, as soon as we got off and clambered up some stairs there was a monkey sitting RIGHT THERE. 🙂 He was casually staring out at the gorgeous view from the top of the rock, like he’d seen it every day and humans were no big deal. We enjoyed seeing more monkeys as soon as we walked down the path, and I saw a few interesting scenes play out.
So, while the rest of my family were eating lunch, I watched a baby monkey’s acrobatics. He clambered all over the wall as his parents groomed, only about a foot away from us humans. This little monkey would jump high as he could and then hit the ground with a SMACK. He would climb everywhere, just as playful as any human child. He even had the audacity to peek inside the gift shop and sit smack in the middle of the doorway, next to a stuffed animal of himself! Now this went on fine while the humans all watched and smiled until a young man and women started to bug the baby monkey. The man started to poke the monkey on the feet, so the little creature crawled away a bit, away from it’s parents with a look of, “What are you doing? If I walk away you’ll stop, right?”. So the baby monkey started to walk down the ledge as the lady joined in, poking the monkey. Eventually the couple pushed it so far away from it’s parents that THEY HAD TO PAY. The mom and dad monkeys raced, honking and roaring at the couple. One grabbed a pant leg while the other pulled hair. It was glorious. Though I may be being harsh in saying this, idiots get what they deserve.
Another funny monkey incident was when my parents had just gone inside and the monkey parents were quietly grooming. A man across the little terrace was taking out a bag of chips when, WHOOSH fast as lightening, and smelling the bag from almost twenty feet away, the mother monkey RACED toward him and grabbed the bag. She ate the chips just like you or me, by sitting down and sticking her hand in the bag, selecting a chip and eating it with her hands with much gusto.
So if you visit the rock of Gibraltar here are some tips. 1. DON’T BRING FOOD. The monkeys will smell food a mile away and will WANT it. 2. DON’T TOUCH THE MONKEYS. Like I mentioned earlier, you’ll either get mauled by some parent monkeys or bit severely on your hand. They may look fluffy and cute but they are WILD animals and to be treated with respect. 3. SUNSCREEN. Enough said there. 4. Bring some good walking shoes, the tunnels go up, down, around and EVERYWHERE!
If, after hearing all this, you wonder why the monkeys are on the rock at all, think about how, A. This is the monkey’s home. B. They’re very fun to meet. And C. If they were taken away, you’d be getting rid of tourism in Gibraltar which would lead to a huge dent in many people’s living.
The monkeys have a big history in Gibraltar, they’re not even called monkeys, but are Barbary macaques. They are descended from the North African population. Their arrival in Gibraltar was most likely orchestrated by the Moors, who occupied southern Iberia, Spain and Portugal between 711 and 1492. The macaques were originally kept as pets. The monkeys were soon a part of the mountain, and lived high up in the chasms of the rock for many decades! Their population took a horrible dip though, and only a few were left! So, incredibly, the great Winston Churchill ordered that North African replacements must be found and taken care of, Gibraltar is not Gibraltar without it’s monkeys! The British Army, and later the Gibraltar Regiment soon took the monkeys into their care, with LITERALLY a military fashion. An officer was appointed to supervise their welfare, food allowance in the budget, and birthrate. When a new arrival came, the little monkey would be named, often after governors, brigadiers, or high-ranking officers.
Now, these monkeys are microchipped and tattooed for identification and brought in for regular check ups.
One of the greatest sights I saw that day was the cave, St. Michael’s cave. The massive, spiraling, breathtaking, delicate spires dripped down from the cavernous ceiling and creeped up from the stony floor. The area is even used as a concert hall! And it even was once proclaimed a bottomless pit by the Romans and was a Military hospital. I hope to see a bat.

“From there to here, and here to there, funny things are everywhere.” – Dr. Seuss