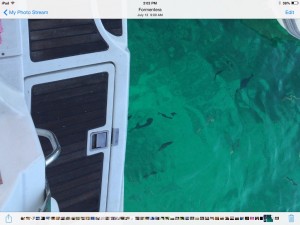 Ok, so if anyone asked me, “Tell me about the fish in the Mediterranean” a week ago, my answer would have been, “What fish?”.
When we first came to the Med there was a profound lack of fish. When we laid anchor the fish were not present, when we walked on the beach the fish did no care to join, and when we went swimming the fish turned a cold shoulder! It seemed the exact opposite of the British Virgin Islands, with its huge population of colorful aquatic life, along with its coral reefs which also don’t exist in the Med. All and all, it seemed to have smillar types of ocean dwellers as in the Long Island sound: Darkly colored fish in Marinas, tan/grey small fish in swimming areas, and guppies, though no horseshoe crabs or spider crabs.
So at first, as you can see, we weren’t too pleased with the lack of fishes! But I like to believe that even the normalist of things can be fun, so one day I went out to the cockpit with some cereal and a brilliant plan! Feed the fish! Maybe not original but still fun!! So I dolled out the cereal and they flocked toward me! Tons and tons of giant black carp-like fish. So then I desided to have a little more fun! In our first Italian port I took a great big net and Cheerios and stood out onto the dock to catch some little odd minnows I saw before. I tried different techniques and was later given some more by my daddy. It paid off! In the end I caught 2 fish in one go! I let them go though, because it must be a terrible fright to be stuck in a giant net with no escape at the hands of a HUGE person monster! Then I caught another one later on and released that little fellow after showing my father. In the end I suppose it worked out for both the fish and me, I got to see them, and they got their cholesterol helped. Win, Win!!!
We also went swimming in a GORGEOUS cove with beautiful rock formations encircling us. There we found some more fish, and really deep, cool caves! We pulled the dinghy up inside one to investigate and found the inside rim, where the water met rock, red and pink with some florescent purple! It looked as if we were in a giant mouth! Anyways, we swam all around before taking out some (VEY SALTY, and a bit past its prime) bacon bits to feed the fish. We sat in the dingy beside true boat as my mom served the fish the bacon. THE SWARMED TO US! IT WAS A FEEDING FRENZY!!! I leaped in and out of the water, both thrilled and kind of scared to be near so many fish that would swarm toward you at any moment. I also served them some watermelon (also past it’s prime).
I later sat with my daddy one night in a calm, secluded bay and we tried out the new fish light that my father fixed up. We dangled the light down deep into the sea and watched a few curious black fish swim around it, as I sprinkled rice crispy cereal for them.
Later, in the nature preserve in the Magdalena islands we had a GREAT swimming experience. While Maddy was in the cabin feeling sick and not wanting to move, we decided to leave her in peace to rest while we took a swim around the boat and on the beach. We had TONS OF FUN. We started out in a swim around the boat and hence to the sea grass and rocks we saw earlier. There were TONS OF FISH!!! Swimming in schools, on their own, following us, and especially in the cracks of rocks, and we saw some fluorescent green and pink fish there. There is also what looks like neon blue lichen on the rocks! It was wonderful! We also went swimming again in the morning, though it is best when there are no people there during dusk, because WOW there are a MILLION BAJILLION people there during the day!!!! We walked down on the beach and rocks during he evening, meeting a nice couple and having a good time. We saw weird GIANT alga blooms there! We also saw a flounder.
The next fishy experience was today, when, in our marina, I tossed the rinds of my watermelon overboard and MASSIVE BLACK CARP-LIKE FISH FEEDING FRENZY!!!!!
So it turns out that there are many fish in the Mediterranean if you just look and keep a positive attitude. However there might not be as many as there were before. Boats are belching fuel and other toxins into the water as well as laying anchors in the sea grass that is the life blood for fish in the Med. This grass is extremely important and makes up much of Thr fishes habitat and its being ripped by ships who anchor in unapproved zones. We must take care of the fish in our ocean because there is only ONE sea on this planet, and the fish need our help more than ever now.
A few tips for swimming in he Med are: If you want to see fish on a dock, feed them. If you wish to find fish in a cove or anchorage, look in grassy and rocky places as well as a rocky cost. DON’T LAY ANCHORS IN UNAPPROVED PLACES EVER.
Good luck in your fish hunting! Send them my bet wishes!

“Unless someone like you cares a whole awful lot, nothin is going to get better. it’s not” – Dr. Suess