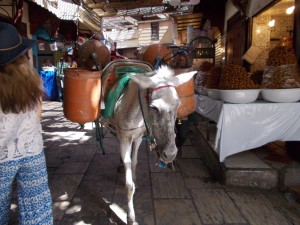 So with the call to prayer (Muslim priest calling everyone to pray at a mosque, usually broadcasted by speakers throughout the neighborhood) echoing in my ears I will start tonight’s post! Today was a very interesting day. We woke up and had an amazing breakfast with flat bread and spiced egg at the hotel. Then I put on my long pants (they are very conservative here and in order to show respect we all have to wear long pants and shirts) and my family headed out to the Medina. The Medina is a market, a huge market, with tan walls, dirty streets and narrow alleyways. It was closed today, which I’m still not sure was because of the day of the week or the fact that this month is the holy month of Ramadan. Some stores still remained stubbornly open and walking through the streets, it felt like we had been transported back into the Middle Ages. A shop keeper opened his discussion with “a thousand welcomes” and donkeys made their way up the cobblestones as old women in head scarves hobbled together. There were stray cats everywhere and random posters on the walls said anything from history to advertising Disney merchandise. The people here are very aggressive. Not in a mean sort of way, but they try and offer you this, ask if you want that, raise prices of items 5x as much as they should be etc. Several people came up to us asking if we “want guide very good” and one man ended with an angry “why?” when we refused him. The shopkeepers expect you to haggle and nothing is its honest price. We did some test runs at jewelry shops and I was able to get a necklace and bracelet for 200 Dirhams (which is roughly $20 U.S.) which is still a lot. It’s hard, the shopkeepers are very friendly and smile as they try to earn as much as possible. Anyways it was an amazing cultural experience and it was incredible to walk streets that were probably thousands of years old and hadn’t changed much in that span of time. We returned to the hotel in the later afternoon and I treated my sister to a good old fashioned crew workout before jumping into the pool for relief from the 107 or so degree heat. We had a great dinner at the hotel which consisted of couscous and fruit salad. We take cooking classes tomorrow and in two days head into the desert. –Maddy