So, I’ll start this with the cats! Kitties are EVERYWHERE in the Medina!!! They line the streets, walk by your legs, and are surprisingly very sweet. They stand in circles around the horrifically smelling butchery and sometimes in front of breadshops, where a kind child or sympathetic adult will give them tid-bits. Many kittens live in Fes, so it is quite common to see a few newborn kittens curled on a doorstep or playing in he middle of the street. Moroccan people don’t generally mind the cats, they keep away the mice, after all! But some, like our chef, Souad, say that the cats are very lazy, they just lie around all day! It’s hard to not believe that, for a common sight in the street is a lounging cat, just laid down in the middle of the bustling street!
On our first day we went to a fun restaurant with unique seats (every restaurant in Morocco seems to have a different seat cover). We were just starting our meal when my sister giggled and my dad, sitting next to her calmly stated, “oh, a cat”. Sure enough, to my delight there was a black and white cat, more of a kitten, under our table! The kitty was the same one we had seen before, being fed some meat by the son of a bread seller. She patiently waited for food, though we couldn’t feed her any, for A. The owner would think it rude and didn’t seem to want cats in the restruant (though all the seats were outside) B. Because we weren’t particularly sure of what Moroccan etiquette demanded in that situation. After a while though, we began to realize tha she was just a friendly cat that wanted a meal. Granted that it was stupid for who knows what the cat had touched, my mother and I petted her and she purred all the while. I immediately named her Langas which means long in Spanish. When we finished eating we wished Langas a happy day and departed. I hope she’s having fun as we speak. 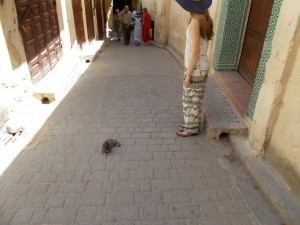 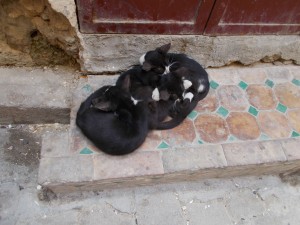 The other animals found in the Medina are Horses and donkeys! You’ll often her the call of, “Yellah!!!!” (Go) Ring throughout the crowded streets when a mule and handler pass. These equines usually hold EVERYHING someone needs to take to market, including lettuce, grain, and even huge metal containers of propane! However, many look a little exhausted and starved, they’re working animals after all.
Song birds in parakeet cages are also a common sight. They hang off of shops and sing their tunes to the crowd. I believe they are for sale.
The funny thing about Morocco is that the people there don’t keep pets! Aside from working sheep dogs, rich westerners, and big homes with guard dogs, Morocco is not a place with pets! Just other mouths to feed! But that doesn’t mean that no pets are wanted. Our chef at cafe Clock, Suad, told this information. Her sister’s son loves to bring little kittens into the house until they grow up (for Morroco is riddled with tiny kits smaller than my hand!), many of the older generation though, thinks of cats as just more trouble, so the mother tells him to turn them out.

What you have to remember when you enter Morocco is that A. the country IS NOT a scary country like Tunisia at the moment B. Bargaining is a way of life. When you come to Morocco be ready to be charged a good price for your item you want to buy. But we warned! Things are a TON cheaper in Morocco! If you get sandals for $12 and think “Wow! What a great price!”, remember that in Marroco sandals are probably worth $2. If you are a foreigner and maybe even a local they’ll set the price at about ten times what it’s worth. So bargain! It’s not offending a Moroccan at all if you do, it’s in fact excpected! Use tactics like: shock at such a high price, respect “I know it’s a great product but I just can’t pay that price”, feign that you have only a few dollars, look at the time like you have to go, say you can’t pay and go to leave the shop keeper might stop you for a better price

My favorite parts of the trip were getting Henna tattoo, the Riad Barraca, the Riad’s breakfast, the Cats :), the Desert excursion and the camels, the Medina itself, eating with Langas, hearing all the history, and café Clock and cooking with Suaod, one of the friendliest and happiesst people we met in Morocco.
All of these experiences go to prove that Morocco is not a corrupt and terrifying country. Morocco is not the thieving country of crooks and beggers. Morroco is not evil.
. Morocco is the smile of a taxi driver saying, “Enshala”. Morroco is the smell of spices wafting up from Suaod’s tagine as she laughs and tells of her family. It is the merry clamor of the Medina with it’s shops and energetic salesmen. It is the giggles of the children when my father bangs his head on a door because of his hieght and the meows of kittens waiting for a tasty morsel.it is the joy of Amazir children as they run about the tourist’s car, playing in the hills of the nomad land. It is the setting of a burning sun as a Sahara moon rises from the windswept doons, over smelly camels.
So as the ferry pulls away from the sparkling shore, we remember the wonderful time we spent here, and look forward to the next journey we’ll take to Morocco!