Italy is different from New England America. Which is a bit of a “duh, obviously” observation, but the difference is made in ways you may or may not expect. First are the islands. While we were still in the Long Island Sound, the islands looked normal sized and nothing special. When we’re in Italy the islands look normal sized and nothing special. But when compared to each other our old islands of the Atlantic are suck-bunny. The “large” hills are no more than slightly slanted slopes compared to the giant italian cliffs. But when seen from above italian islands look like stubby meat chunks of the knife of some Morrocon Butcher compared to the majestic length of islands in the US. 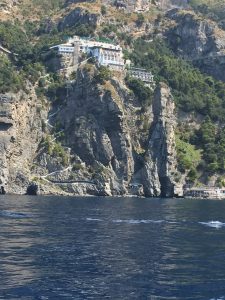 Of course, islands that are short and small have their own beauty and do not wish to join their hulking brothers, whether long and short or tall and small
Each island has their own unique grandeur. 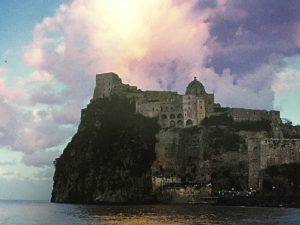 Another difference are the smells. Now this was mentioned in my previous blog post, but because a cookie looked like it would rather be in my stomach, I stopped writing to eat something much more important. However dinner isn’t ready yet, so the smells will be addressed.
On the streets of big cities (like in America) or small towns (not so like in America), your nose picks up some interesting odors. Mostly issuing from puddles, they range from interesting to slightly unpleasant. This may be due to the old infrastructure, sewege, or the open air market’s rotting fruit. However these aren’t the only little gifts to sniff, in small food shops there are a variety of
Interesting smells. It may be from the frozen section, always smelling funky, that doesn’t have strong doors on. Or the meat and cheese open to the air emitting odors. But no matter where they come from, there is no shame in stepping outside for a breath of fresh air, though I do advise you to walk inside and experience the exotic discomfort of the nose.
Now, I will talk about the size of stuff. It’s small. Much smaller. Not as many chain stores as in America (Desigel or whatever the way you spell it, is the only one I’ve seen a lot). Except, drumroll please, CHURCHES. Big surprise right? (That was extremely sarcastic in case you were eating your own cookie and didn’t notice). Anything to do with religion is decked out, as usual, with gold and priceless frescos with huge fascades.
However I did see a church built in 2010 today. Very interesting. Not much in the way of ceiling art, and it was relatively bare (though extremely ornate compared to America, as Cassie’s jaw dropping pointed out). A couple of the art pieces were very old, so surprise there, because there is NO shortage of museum worthy art. However it was interesting to see what a new church’s plaster walls and marbles looked like, kind of like how the old famous ones would’ve looked in the Renaissance.
But now it’s dinner, and I’m done hiding in the bathroom from setting the table. So, the end. 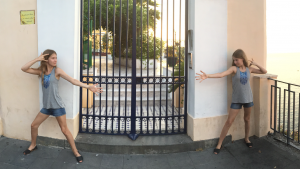