So, our land travels in Morocco turned out to be the most enjoyable of epic trips. I adore my sisters and having us together while visiting a spectacularly wonderful country was pure magic. Add to them Maryly, Maddy, Helen, cousin Will, his fiancé Cassie and my girls’ friend Shea, we had a fabulous time! Uncle Pete’s absence was noted everyday with some aspect of the trip that he would have loved or that he would have been able to explain to the rest of us. Damn, we missed him. I was concerned about the size of the group when we were setting this up (visions of herding Cats….). But I need not have worried, it was effortless. Each brought their own personality AND their own Facebook account. There is no doubt that this was, by any measure, an extremely well documented trip. I hesitate to add anything to the dozens of posted photos and written entries except to say that this trip exceeded all expectations with the general Love and Affection that prevailed. Thank you all!! 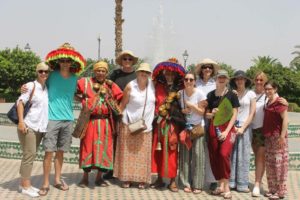 On August 2 it was back to Heldeleine for the immediate family of me, Mars, Maddy and Helen. After a long travel day back to Marina Smir, we had a relaxing dinner and a movie aboard. The next day started with immigration, customs and some cheap fuel. All these things where accomplished with tremendous ease right at the main dock, 50 feet from our berth. The whole experience at Marina Smir was excellent. Very easy clearing in and clearing  out. Hasan at the main office kindly and professionally handled the clearance of Heldeleine into the country AFTER Laurie and I had left for Marrakech. Though there were no “tips” demanded (since the King’s nautical toys are here there is no question of funny business) I felt free to tip as I would at any marina the world over. A bit for the fuel dock guy, a bit for the office and a bit to the friendly security officer nearby. But no officials would except any gifts. Though there were no gates between the quay and the dock space there WAS security posted 24/7 near our boat and and the overall feeling was relaxed and extremely safe and friendly. After refueling, it was overnight to Cadiz, Spain, through the Strait of Gibraltar. Things started very calmly until we made the corner around Ceuta and headed west into the Strait. The projected light (2-5 knot) winds became 20-25 knots on the freakin’ nose and I became a very pissed off Captain. WTF!!!! Is the freakin’ forecast ever right in this stretch of water? Apparently not. After bashing through this shit for 4 hours and beginning to fight an adverse eddy that slowed us to 2 knots made good, we bailed and turned right to cross the actual Strait traffic separation scheme perpendicularly (required by maritime law in order to minimize our time and exposure to the large ships) and dodged the giant leviathans that never stop passing through this narrow opening to the Mediterranean. We timed things well. It helped that it was daylight and things are always better with a little depth perception that you do not get at night. Once on the north side of the Strait we were able to sail in a veering north wind. We made the Tarifa corner and sailed most of the night up to Cadiz. Unfortunately we got there way too early and had to motor circles to kill time (you don’t just stop when there are ANY waves, it tends to break the crockery…). Into Cadiz and the Marina America (yup, getting closer to home!). Cadiz was Heldeleine’s first port of call after the transatlantic in 2015. The crew enjoyed it then and the  latest crew loved it. Old world charm with great shopping….I’ll let the photos tell the tale. 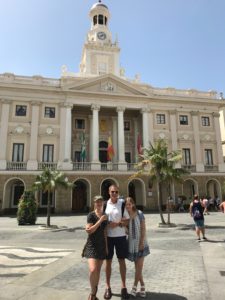 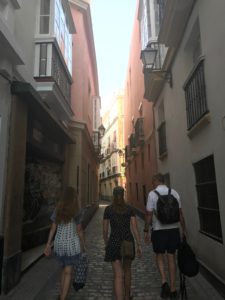 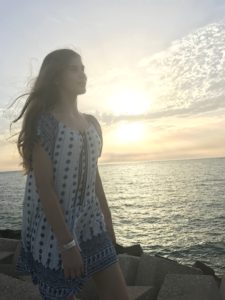 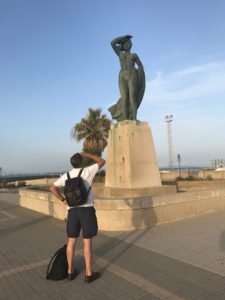 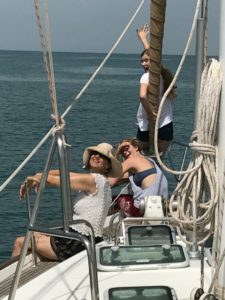 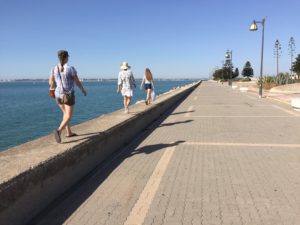 Next installment: Heldeleine does not wish to be put away and tries to stop us with an engine failure in no wind and very lumpy seas.