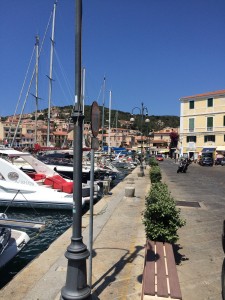 Hello!! I’m back, man it’s been a while since I have been able to post. We haven’t

had a lot of wifi. Right now we are in Sardinia, Italy, in the Maddalena Islands, which are a nature preserve, however I think it’s a nature preserve in the loose sense, as there is a city here and a huge amount of people. I thought I would just post some highlights from our last couple days: I went to the hospital (heat stroke, nothing that serious) and got an IV. It was actually a lot of fun, though I’m not a huge fan of needles. There was a couple cardboard boxes near my bed there that had the word “Ebola” on them so, that was interesting! Since Africa is part of the Mediterranean and many immigrants come through here, Ebola is of real concern. I also learned not to leave my dad in an emergency room for too long (he got bored and started blowing up latex gloves and sticking stuff to himself). Another interesting thing that happened recently was a strange parade we saw, last night. It was dark and we were about to tuck in when we heard a band and a voice from loudspeakers talking in Italian. There was a parade of priests, military cadets and a huge statue of St. Mary Maddelena that was loaded on to a ferry and set off, followed by a crowd of boats with priests taking selfies. Afterwords was a huge fireworks display. Today we check out the town we are in (La Maddalena) some more. I will post tonight. –Maddy